Annecy, the Venice of the Alps

Annecy called the “Venice of the Alps” offers to visitors harmonious and romantic landscapes. The old town and its colorful pedestrian streets, crossed by the river Thiou draw a picturesque and enchanting framework. Its numerous food markets, creators, or its flea markets enliven the streets. Rich in cultural activities, such as museums, castles or exhibitions, Annecy is rated by the label “Art and History” which has so much value within the hearts of the inhabitants. Not to mention the pleasure of the senses with a traditional dish at one of the many restaurants, or a relaxing walk along the lake 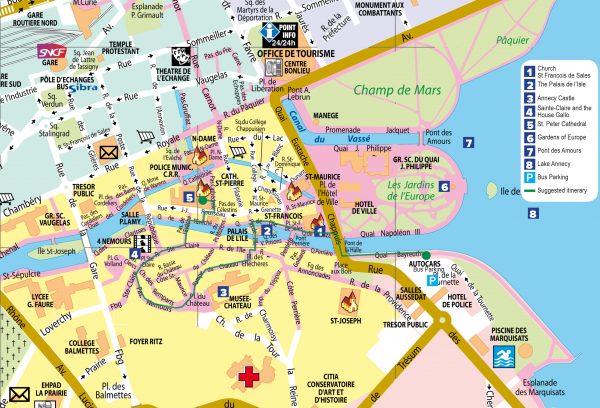 Listed as a historic monument in 1900, the Palais de l’Ile, often described as a “house in the shape of a ship” has been a prison, a courthouse and an administrative centre. It is an original structure, the oldest parts of which date from the 12th century.

Listed as a Historical Monument in 1902, Annecy Castle became the residence of the Counts of Geneva in the 13th and 14th centuries. Over the following two centuries, successive modifications transformed the castle, giving it the unique appearance we can admire today. The resulting structure is a combination of medieval defensive architecture and renaissance elegance, inspired by castles in Ile de France. Abandoned as a residence in the 17th century, the Annecy Castle was later used as military barracks until 1947.

Lake Haute-Savoie, Lake Annecy is one of the cleanest lakes in the world. A major lake of Haute-Savoie, it is also the second largest lake in France after Lac du Bourget in Savoie.

Set up as an arboretum when Savoie was joined to France, they present a beautiful variety of species from Europe, America and Asia. One can admire several century-old giant sequoias and a ginkgo biloba, “the tree with forty écus”. Along the port on the banks of the Thiou (pier), one discovers the massive constructions of the castle.

Enormously photographed by holidaymakers and used for wedding photos, the Pont des Amours is a must for visitors discovering Annecy.

Facing the boats mooring on the banks of the quays of the Canal du Vassé under the shelter of the surrounding century-old trees, this bridge is indeed a symbol of Annecy.

Crossing the Canal du Vassé and linking the Gardens of Europe to the Pâquier esplanade, this metal footbridge allows passers-by to reach the Jacquet promenade at the Jules Philippe quay without getting their feet wet or making a long detour. From the bridge, passers-by can enjoy a 180-degree view of the lake and the nearby Swan Island.

The church of Saint-François, former chapel of the Visitation, was rebuilt in 1642 to house the tombs of the founders François de Sales and Jeanne de Chantal with dignity. It is a fine example of architecture known as the Counter-Reformation (1560-1640).

Sainte-Claire and the House Gallo

The main artery of old Annecy is home to many shops under its arcades. At n°18, the hotel (16th century) of President Favre was the first seat of the Flori-montane Academy, then the bishopric of Saint François de Sales from 1610. At the corner of the rue de la République appears “la Manufacture”, a group of contemporary buildings.

Thanks to the creation of the Place Sainte-Claire in the 20th century, the Gallo house, named after its owner and designer, the architect Charles Gallo, was particularly highlighted. It gives this part of the city a Turin air.

In 1794, Charles Gallo, a member of the body of architects of the kingdom of Piedmont-Sardinia and settled in Annecy, renovated and enlarged his house, with the desire to bring it up to “modern taste”.

A somewhat hidden historical monument, Saint-Pierre Cathedral is a building erected in the 16th century in old Annecy and unjustly eclipsed by the Perrière Bridge and the old prisons just opposite.

Built for the Franciscans under the direction of Jacques Rossel in a typical “Renaissance” style, the chapel had Saint François de Sales among its first bishops. At that time the place was divided between 2 confessions: Calvinists and Catholics.