The medieval bourg, ideally situated on the expanse separating the “little lake” from the “great lake”, still possesses some of the essential elemants of the fortifications of the 14th century: the castle, doors, ramparts….

Known as a modest fishing village in the beginning of the century, Yvoire is now ranked as one of the International Laureates of Floral Decorations, and is a member of the Association of the Most Beautiful Villages of France. This medieval city celebrated its 700 years in 2006. 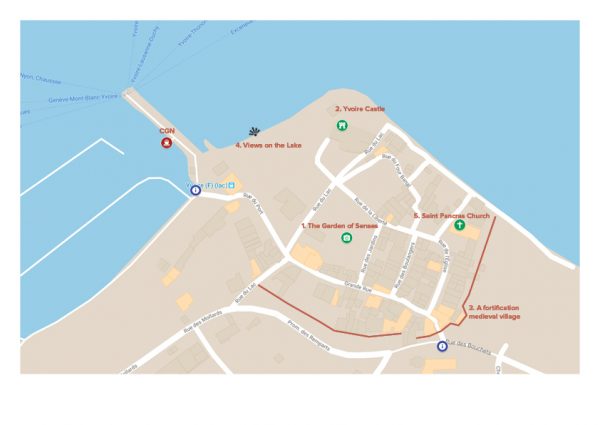 The Garden of Senses⭐

The labyrinth – Garden of Five Senses, at the heart of the medieval city is a natural little piece of heaven classified Remarkable Garden by the ministry of Culture and Communication. You will awaken your 5 senses thanks to the wonderful plants !

Built in 1306, Yvoire castle is the target of all photography-lovers of Yvoire. When under construction in the 14th century, the military dungeon was used to watch the navigation and control the road the linked Geneva to the high valley of  the Rhône and to Italy. Today, the majestic shape of the Yvoire castle is still standing as a sentinel on lake Geneva.

Views on the Lake

Due to its ideal location at the forefront of Lake Geneva, the village of Yvoire is a central point to enjoy the lake.

The church of Saint Pancras in Yvoire is very old and has known many changes. Classified Historical Monument, it’s an unavoidable place to the visit in the village. Enjoy in particular the onion dome, distinguishing feature.

In the 14th century, there is no road around the village. It crosses it and the fortified gates built on the order of the Count of Savoy Amédée V, control its passage. The Porte de Genève (or Porte de Nernier) in the ramparts of the medieval village of Yvoire.